I’m a complicated vegetarian, in fact I wouldn’t officially call myself a vegetarian because I’ve never given up eating fish, only meat. So, you could call me a pescetarian though it doesn’t really have a nice ring to it, sounds more like I have a weird phobia. But I’m not really a pescetarian either as I went back to eating chicken when I was pregnant with the twins, although I ensure it is free range, organic, had a nice life and slaughtered in a humane way, preferably by having its beak stroked while it is put to sleep.

When I was 13, my parents took me and my then 16-year-old brother to a cottage holiday in Wales. It was a beautiful place with a natural waterfall at the end of the field which housed our little cottage. The field also contained a lot of sheep, a flock I suppose you could call it. We loved having them there, waking up to their bleating and as it was springtime, being able to fuss the little lambs as their weird eyed mothers looked on. It was all a big Disney film for me, however, I skipped out to see the lambs one morning to find the farmer backing up a huge lorry and assembling a ramp. He made some unintelligible noise at me as my Dad rushed out to bring me indoors, reassuring me that ‘the lambs were being moved to a different field or just being taken for a shearing’. But I knew what was happening, I finally understood that the reason Clarice didn’t eat lamb shank wasn’t because Hannibal Lector put her off it with his eating liver impression, but because of that noise the lambs make when they are taken away. I gave up meat that day. 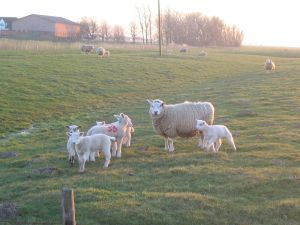 Now 13-year-olds don’t do things by half, we like to make a point. If we are becoming vegetarians it means soya milk, plastic shoes and animal rights campaigning. No sooner had I unpacked my suitcase from the ‘sheep holiday’, I was then rallying my friends to paint a sheet against vivisection and joining a march on Trafalgar Square. I was trying to teach my friends the evils of McDonald’s and refusing to eat anything that had even been in contact with an animal. My Mum has been a vegetarian for over 40 years, she became a veggie in the early 70s when even Paul McCartney was eating bacon butties. As a child there were bowls of mung beans soaking in water in the kitchen way before the invention of Quorn. She was the original Veggie but never forced her views on us and used to ‘switch off’ as she prepared our meaty dinners. Following the Wales holiday, she was concerned about my sudden refusal to eat meat. She was very supportive but when I turned down her offers of lentil hotpot in exchange for my new diet of plain jacket potato she knew she had a battle on her hands to get me to eat properly.

Over the years I adopted a healthier approach to my vegetarianism, i.e. eating more vegetables and thanking the McCartney’s for Linda’s range of sausages and burgers and I did go back to fish. However, I have never returned to eating meat and especially not lamb. Now I am a Mother to 3 children and have a hugely carnivore husband. I decided to take the same approach as my Mum and allowed them to eat meat while I try to pass off my veggie food as meat to their enquiring eyes. However, what I am 100% adamant about is that I try my absolute best to only buy meat that is free range, organic and British. I do this to make sure the animal has had a certain standard of welfare before the big day comes to be carted off, but mainly to ensure the farming is at a certain standard so that the meat has less chance of containing god knows what (GKW). GKW can be animal antibiotics, bulking ingredients, a higher risk of BSE and most recently horse meat.

As the many shocked messages hit Facebook last week about the realisation that supermarket giant Tesco had sold ‘beef’ burgers containing horse meat, I can’t say I was that surprised. When buying a pack of burgers for £2 I find it hard to understand why people think they’re getting quality meat for that price. When me and hubby first co-habited we had a long debate in the meat aisle of Sainsbury’s about the price of free range chicken. I didn’t want to buy 4 chicken breasts for £3 as I knew we would buying a chicken from a battery farm that had been pumped full of GKW while alive and then pumped full of GKW pre-packaging. I tried to defend the reason that free range chicken is smaller and more expensive is because it is actually chicken and not part chicken, part pig skin and 70% water.

I don’t wish to get on my soapbox about eating meat as I know people will start pointing out that I’m wearing leather shoes, but I do wish to encourage more ethical farming. I don’t think its good enough for multi-billion pound companies like Tesco to pretend to be shocked that there is horse meat in their meat products and pointing the finger at everyone but themselves. You should get what you pay for. I think meat products such as burgers should be labelled honestly much like cigarettes; Warning: may contain horsemeat, pig skin and ground down bones. I bet more people would switch to free range meat then.

It has been said that the horse meat scandal will encourage more trips to the butchers and more home cooking. And as a sort of pescewotsit/vegetarian I actually welcome this. I personally buy organic mince to make my children’s burgers and I buy free range chicken to make my children’s nuggets. If we can encourage less processed rubbish meat and more wholesome meat-eating isn’t that beneficial for all involved, animals and people alike? I know the big argument is the cost but I find you can cook on a budget without budgeting on meat, embrace your blitz spirit, our parents and grandparents did it. I will finish with a quote from the Chief Executive of Iceland for whenever you’re thinking that cheap meat is OK. When asked why his company didn’t test for horsemeat in his beef products, even though they have started to now, he answered “I didn’t test for cat or dog either.” Quorn burger anyone?