December is a bit of a crazy month in our household.  Apart from the main event with the big man in the red suit on the 25th, we also have my birthday on the 19th, our eldest sons birthday on the 24th and our wedding anniversary on the 1st.  It can prove to not only be a pricey couple of weeks, but also very limiting trying to squeeze in all the celebrations alongside various nativity plays, Xmas work drinks, etc, etc.  With my eldest son’s birthday celebrations now monopolising the nearest weekend before Xmas, I have had to become a bit tactical on the celebration of my birthday. Obviously, with my 30s dwindling before my very eyes I am happy to not make a big fuss, but I also like an excuse for a party or a big night out with friends.

A very dear friend of mine has a birthday on 27th November and we often share a night out to save on our money/time/liver damage and this year we decided to up the stakes in the planning process and organise a weekend away involving me and my hubby and him and his partner. We decided on a European city as the basis for our getaway but hadn’t bargained on how tricky it would be for us all to agree on where to go. Between the four of us, we had visited quite a few of the obvious places already and, of the remaining cities, we couldn’t agree on one in particular. So, my friend decided that the only fair way to agree on the destination would be to let the hands of fate decide, or more accurately we agreed that whichever country won the Eurovision Song Contest would be our destination of choice (providing Easyjet flew there from Stansted that is). After managing the first fifteen minutes of the excruitating and frankly bonkers Eurovision performances, we decided to learn of the winner the following day and Denmark were the victors! This meant that Copenhagen would be our birthday break away and was also a city that hadn’t been on any of our shortlists.

So last Friday, the four of us met in the VIP lounge of Stansted (one of our party is the main man when it comes to guest lists) to start our weekend of celebrations, as well as my self-medicating process of drowning out the fact that I would be getting on a plane shortly. With four adults and six months notice, you would think that we would have had an itinerary nailed for our weekend away, not so. We had managed to book our flights and had opted for renting an apartment rather than booking a hotel, but the only other research we had embarked on is emailing each other songs made famous by the stories of Hans Christian Anderson.  And with only 2 nights and 1 full day in the Danish capital we should have really made more of an effort to do some research.

We arrived early Friday evening and showed our apartment address to a cab driver who worryingly raised his eyebrows and then informed us it was opposite the cemetery where Hans Christian Anderson was buried! Thankfully the apartment was lovely, even if two of the beds were in the living room, but we would later discover that the type street it was on – the cemetery was the least of our worries. If you imagine a tourist visiting London and then mistakenly renting an apartment in a really dodgy housing estate which the guidebooks would name the ‘Latin Quarter with an urban and artistic feel to it’, then that is where we were staying. However, once we made it past the 20 or so kebab shops which were obviously a front for some sort of trafficking operation and talked ourselves out of entering some dodgy looking bars, we crossed the bridge and entered the nicer part of Copenhagen.

When we crossed the river and reached the less ‘urban’ side of Copenhagen, we were in for a treat. Stunning architecture, wide cobbled streets awash with cyclists outnumbering cars, multi-coloured houses adorning the canals and a plethora of quaint bars providing their customers with blankets so they can snuggle under the heated lamps outside and watch the world go by. After a mammoth walk trying to decipher our route through the identically named streets, we found a little Danish bar where the customers were literally spilling out of the door. So with my Scandinavian looking friend (even though he’s a Scouser) leading the way, we wedged ourselves inside to be engulfed by a wall of cigarette smoke and a noisy folk band of pensioners playing their very own Eurovision medley. We ordered some local beer from the barmen (who were also smoking) and stood at various angles in available gaps to watch the band. An elderly gentleman who was sat beside my spot started putting some metal caps on the ends of his fingers, he didn’t strike me as a violent type but when he started to undo his jacket I did feel slightly uneasy. Thankfully, his unbuttoned jacket revealed a metal washboard which he began to play with his metal capped fingers to many whoops from the crowds including us and mainly me from a sense of relief. Next thing, a lady shouted a request from underneath my friends elbow and the band started a rendition of ‘We’ll Meet Again’, to which the whole pub joined in. With the dark smoky interior, the ageing clientele and the rousing war songs, I felt like a member of the resistance in war-torn Europe. 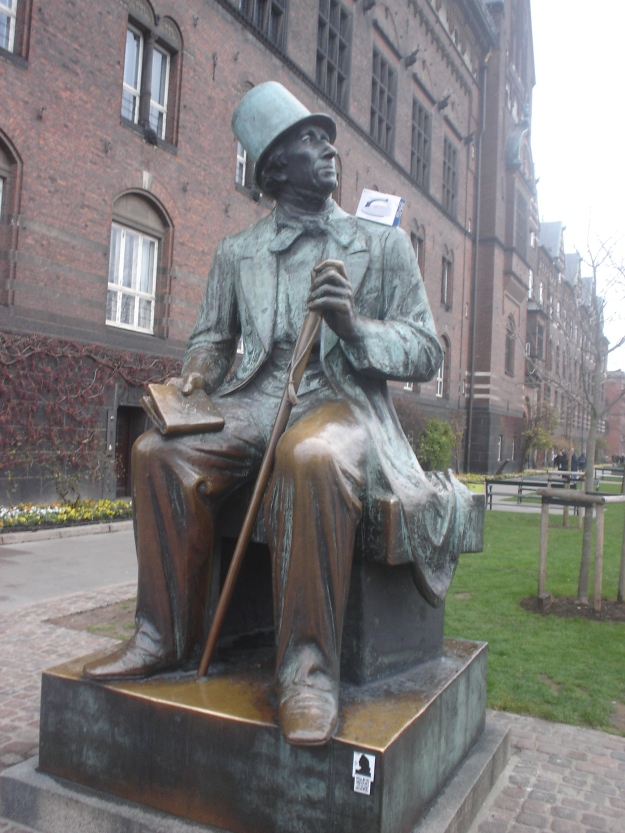 Hans and our iron

The following day was our sightseeing day. We woke at 9.30am (a lie in on a Saturday is such an unusual experience) and made our plan for heading out to see what daytime Copenhagen could offer us. After eating our bodyweight in Danish pastries at the local patisserie, our first port of call wasn’t on the usual tourist route, my friend needed an iron for his outfit that night and so treated himself to one in a local hardware/pawn shop (this was in our part of town). The iron then become the focal point for the rest of the day and wherever we went, the iron was photographed there first. It did encourage some weird looks but kept us four amused!

Copenhagen is a beautiful city and the Danes, despite their lofty height and need for beards (men and women), are a friendly bunch. We walked miles around the city, checked out the Royal Palace (not a patch on Buck House) and washed our Smörgåsbord’s down with plenty of Glögg. We ended the day in the magical Tivoli Gardens, a 19th Century amusement park which has been updated with Alton Towers style rides but still holds the charm of an old-fashioned fairground. The whole place was decked with a billion fairy lights, their Santa’s grotto entrance was via a field of real reindeer with not a string held beard in sight. We did feel a little guilty that we were there without the kids as we were entertained to a Disney style fountain display and queued up for rides. As the park started to close and we completed four loops on the ‘Demon’ rollercoaster, our intentions of going clubbing after were replaced with a couple of beers at a local bar instead.

On Sunday, we headed back to Blighty, feeling refreshed and a little bit more cultured about another part of Europe. We have decided to make this an annual event, to afford us a break from the kids and to learn a little history about another country (and sample their beer and food as well). I will await the Eurovision Song Contest 2014 with anticipation and hope the winning country is as successful a destination as Copenhagen was.