With my 40th birthday hurtling towards me next December (sob) I thought I might look into the concept of *bucket lists. Don’t get me wrong, I’m not planning on expiring next year (hopefully) but more that I’m moving into a new era of my life and giving my 30s a bloody good send off.

Top of my list is overcoming a few of my fears as it seems that they are starting to grow in number and become more irrational in their strength. Having said that, I’m not rushing into it and definitely not planning on boarding a plane (hate flying) with a jar of spiders (arachnophobic) en route to a circus full of people on stilts (honestly, the whole unnatural height of stilt wearers freaks me out). I decided instead to start simply and address my growing fear of heights.

My new-found feelings of vertigo have come out of nowhere. I cannot recall being bothered about heights as a child, was happy to climb to the top of mountains/buildings in my youth, but over the last few years I am unable to descend beyond four storeys without having wobbly legs. I first noticed it when I took my parents on the London Eye.  I had been looking forward to it, took the afternoon off work and even booked the tickets in advance. We walked into our pod cheerfully chatting and started our ride to the top, at which point I felt a sudden panic, sat on the bench in the middle and stared at my feet. My Dad was trying to point out London sites along the Thames but all I could do was resist the urge to lay on the floor and adopt a foetal position. The last thing I wanted to do was to move to the window and I wasn’t confident my legs would work anyway. As we reached the top, I studied my shoes, feeling waves of nausea, ignoring the odd looks from fellow passengers and assuring my parents that ‘I was fine and they should enjoy the view’. After what felt like an hour, we came to the bottom and I literally burst out of the pod wanting to kiss the pavement outside for being land borne again!

I tried to dismiss this behaviour with the theory that it was because I’ve become a bit of wimp with fairground rides and after all it is essentially a giant ferris wheel. This is another thing with ageing, the fact that I now worry about safety on theme park rides. One of my fondest teenage memories is ‘The Eggs’ ride over my local park when the fair came to town in the summer. A rickety old ride where you could spin your own pod while zooming high up in the air. You couldn’t pay me to go on this ride now unless I could have a look at recent safety test certificates. Even with regard to the slickest rollercoaster at a popular theme park, hubby has to reassure me that it is very unlikely that the seatbelt won’t work and that g-force would also keep me seated. I think I would rather hold the coats and watch then risk it though.

So I decided that my first bucket list objective would be to cure my vertigo before it gets out of hand and I end up not being able to drive up my local multi-storey car park.  To make this happen I booked for me and hubby to climb the O2 in London. If I could climb over the top of a big building, looking out of the window of it in the future would be a breeze in comparison surely? 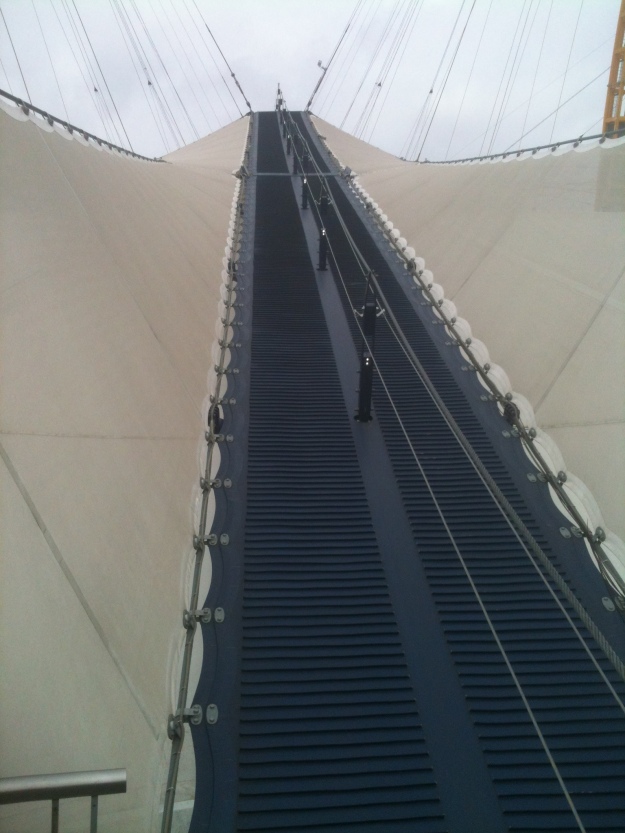 We arrived at the O2 on quite a grim day and were led through our ‘training’ which left me thinking that I had underestimated this whole climb thing. I thought it would be a set of stairs that we could walk up quite easily.  Not so.  It transpired that we would have to put on their special climbing suits, special climbing shoes and learn to negotiate ropes with metal clip thing’s, as if embarking on a rock climbing expedition. Ignoring the height I would be reaching, I felt quite excited at the prospect as I have always wanted to climb and feel that my last little bit of bravery is dwindling, so needed to do it soon. After we were kitted out, we stood at the bottom of the ascent (as pictured) and were instructed to clip ourselves onto the wire as this would stop us ‘falling off’. I considered that this would be unlikely but there wasn’t anything else to grab onto and it was a bit windy so thought it was wise that I was shackled to something.

The actual climb over the O2 is a lot trickier than it looks, mainly because you have to thread your metal clip through metal compartments all the way up the wire. You get the hang of it after a bit and to be honest its a good distraction from seeing how high you actually are! It doesn’t take long to reach the top and although I wasn’t keen on the shoes we were given initially, I was thankful of their grip as the surface is quite slippery.  I braced myself for the summit as we neared the top of the climb and I actually didn’t feel too bad. I think maybe this is because you are literally climbing over a big tent so it sort of feels safe. At the top you are able to unclip and there is a viewing circle so you can mooch about and look at the sites whilst swinging your metal clips between your legs like a weird sort of Morris Dancer. The view was pretty spectacular and I didn’t once feel the need to cling onto hubby’s leg or the least bit like vomiting so felt like I had really grown as a person/climber/non-vertigo worrier.

A birds eye view of the River Thames.

However, the climb down was not as straightforward. The path down seemed a lot steeper and I had to resist the urge to rebel against clipping myself back onto to the wire and to use it as a giant slide instead. But then a gust of wind caught us off guard and I was more than happy to reattach. My family had come along for support, so as we descended the O2, I could see my children, parents and mother-in-law at the bottom cheering us on. My eldest shouted out ‘Are you scared Mum?’ at which I just rolled my eyes to the other climbers in a ‘Kids eh?’ kind of a way as obviously I was now feeling like I had completed my own Everest and not in the least bit scared of heights anymore.  My next challenge? The Shard! Now I just need to Google their safety certificates…..

3 thoughts on “Facing My Fears”