So, who woke up this morning feeling a little bit relieved that it is cloudy today? We as a nation long for a hot summer but when it arrives we don’t really know how to cope with it do we? We complain about the heat, use a myriad of adjectives from ‘ridiculous’ to ‘unbearable’ to describe the weather. We compare it to other countries by saying that the ‘heat is different abroad’ and that we ‘have no breeze here’. Some sections of the media add to the hysteria by renaming our country ‘Baked Britain’ as the Met Office issue a Level 3 weather warning. Level 3! This could cause a nationwide panic! We all happily discuss the severity of a Level 3 weather warning, even though none of us really know what any of the levels mean. What will happen if we reach Level 4? Is there a Level 5?

My  theory is that  Level 1: Feels a bit chilly, might need a jumper or a coat, bit autumnal for this time of year, I think they are calling it Sprautumn (summer that feels like a mixture of Spring and Autumn), might brighten up later, will hang washing out pointlessly as I take it in later with it feeling just as damp, best take a brolly.

Moving up to Level 2: Ooh feeling a little bit warmer now, temperatures moving past the 20c mark, will need to over-buy sun lotion, there will be an increase in people wearing inappropriate summer wear even though it is still feeling a bit cool, best take a cardigan or lightweight coat.

Level 3: Panic Panic! It’s over 30c, we are all going to collapse in a mixture of heat exhaustion and dehydration, we will burn, forests will burn, train tracks will melt, tarmac will melt, we will eat too many BBQs and ice lollies, drink Pimms for the only time this year, not put on enough lotion and develop horrid tan marks while we try and out do each other on how little sleep we are getting due to the hot nights, best take a handheld fan.

Or maybe it’s not that bad and it really won’t last that long anyway.

Our ‘heatwave’ began at Wimbledon a few weeks ago. We didn’t complain as we witnessed two groundbreaking events. Firstly, a British male (gloss over the fact he is actually Scottish bit) won the mens singles and secondly it didn’t rain! And even though it didn’t rain, the officials still felt the need to STOP PLAY to close the roof on centre court just in case it became too dark!

As we now limp through our second week of officially hot weather (really it has only been two weeks), our little cloudy stop-gap today will come as a comfort for many. I do understand that there are vulnerable sectors of the public that do not cope well with the heat; the elderly, the unwell, the young and particularly my Golden Labrador Chester who throws himself about huffing loudly in the heat as we try to cool him down with garden hose showers and clever positioning of fans. My youngest son suggested shearing his coat off like a sheep which I think Chester would have agreed to if he were able to answer. 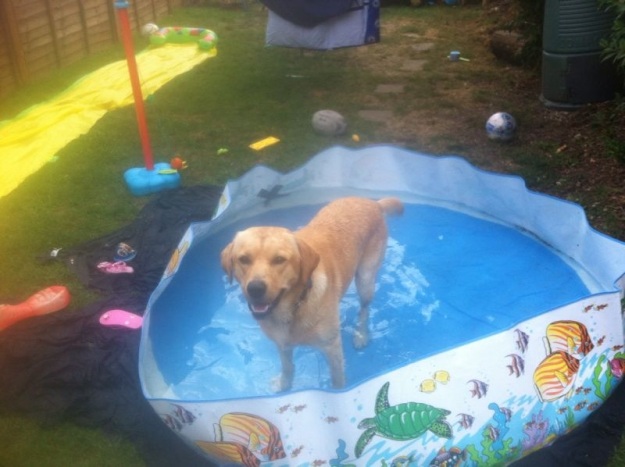 I suppose I am a little cynical when it comes to the panic that ensues with many trivial topics in this country. There are a lot of tough news stories happening around the globe at the moment but our tabloids are either focusing on a ‘Baked Britain’ hysteria or are on ‘Royal Baby Watch’. On The Sun website you can watch a ‘Royal Baby Cam’ which is basically a live streaming of the front entrance of the St. Marys Hospital in London. I don’t know what they expect to see as I’m sure the royal couple will have another entrance that they will use and disappoint the legions of fans expecting to see Kate waddling through the front entrance mid-contraction while Wills follows laden with baby bag and birthplan?

The Met Office have said that they haven’t actually used the term ‘heatwave’ but that we are in ‘a prolonged spell of hot weather’. I love that! It is a term worthy of a 1950s Pathe News broadcast with a terribly posh newsreader telling us to prepare ‘for a prolonged spell of hot weather’! This term is used when the weather is five or more degrees above average for five days or more. What is average though? Do we ever have an average temperature in this country? This time last year we had flash floods and endless rain! Furthermore, according to British folklore whatever the weather is like on St Swithins Day (15 July) it will continue that particular weather spell over the next 40 days. Which you can believe if you have saluted a solitary magpie and chucked salt over your left shoulder this morning.

The powers that be (actually the NHS and BBC were my sources for information) suggest that while we are in our ‘Level 3 heatwave’ that we should not leave the house between 11am and 3pm, keep all curtains and blinds shut, drink plenty (but not booze or caffeine) and bizarrely keep windows shut and only open them an hour before bed to let the air flow. Perhaps we could re-open air raid shelters to hide away from the summer until autumn is back as well?

I agree that the heat isn’t a laughing matter, with three small children I have the daily task of pinning them down to smother Factor 50 on their skin whilst worrying whether the sun lotion will stop them sweating or absorbing enough Vitamin D. This is accompanied with me literally following them around with bottles of water to ‘top up their fluids’ and allowing a temporary over-consumption of ice pops. Equally, I have had to resurrect last years summer wardrobe and stare in wonder at why I bought much of it in the first place. Donning my maxi dress for the school run yesterday seemed like a practical choice of clothing with its long, light material and no straps to avoid tan lines. What I tend to forget is that it has a very narrow hem so I am left feeling like a Geisha as I am forced to take tiny strides behind the kids on the way to school.

Today may be a brief reprieve from the sweltering temperatures as they are set to rise again on Monday, but what we must remember when we are complaining about the heat is that in just sixteen weeks we will be back to the following:

Winter just around the corner