I can remember when the first ever Big Brother graced our screens over 10 years ago. Channel 4 had no idea of the monster they had scheduled. A programme about a group of adults locked into a house like lab rats, having to perform tasks for their food and drink. Nasty Nick was almost lynched and hurried out the back door because he wrote people’s names down with a contraband piece of paper and a pencil. Shock Horror! Then came Celebrity Big Brother, much more entertaining as we were treated to a fly on the wall look at celebs looking dog rough without their make-up on and going into a meltdown as they couldn’t blow dry their own hairdo. But being a Big Brother fan is a full-time occupation, it is a nightly show, along with live streaming on their website which I confess I used to watch during the whole Nasty Nick debacle. 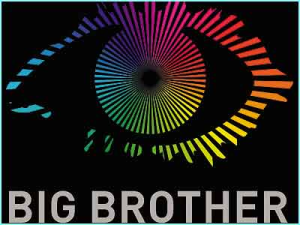 I have managed to wean myself from being an avid Big Brother viewer over the years, it was the George Galloway/Rula Lenska cat moment that helped cure my addiction. I have had no interest in the ‘normal’ housemates for a while now but I do tend to watch the launch night of the Celeb edition, just to be nosey. But for some reason this year I have been suckered back in. Don’t ask me why, there is no-one in the house I’m a particular fan of and they are a fairly uninteresting group of people, but I can’t turn it off. Each evening at 9pm, I feel like Peter Sellers in Dr Strangelove, fighting with myself to try to turn over to a different channel. But if I do switch it off, how will I know if Claire from Steps will ever realise that a onesie is not a good look for her, or discover if Rylan is slowly morphing into Max Headroom and find out why Toadfish is actually in the house?

Reality shows have been a cheap alternative to proper TV for a number of years now. In fact, celebrities will pretty much do anything for a bit of shameless airtime and stress its for charity purposes and not purely for their desperate need for the limelight. Strictly Come Dancing is still raking in the viewers despite Bruce Forsyth’s awful banter and Tess (I’m so northern) gushy interview techniques. My parents are avid viewers but will only watch it once they’ve recorded it so they can edit Bruce out and with it half the programme. 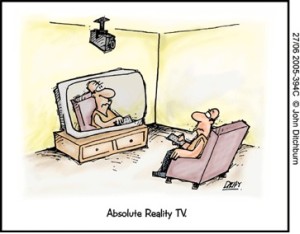 It seems that some celebrities will do pretty much anything in the hope to relaunch a forgotten career. They will eat kangaroo willies in the Australian jungle, don ice skates and be held in ungainly poses while plastering on their air hostess smiles. The most recent addition to the reality market is with the celeb diving reality show Splash. This Saturday night filler my eldest son unfortunately persuaded me to watch with him the other week. We tuned in to see the celebs in training, with the tautly toned OlympianTom Daley launching Ab Fab actress Helen Lederer into the water on a gym mat, as if he was releasing a marine animal back into the wild. Back to poolside and the live show, Vernon Kaye minced about in shorts and t-shirt while the celebrities danced (really) around the pool to their designated diving board. There seemed to be no rule with the dives with some older podgier celebs belly flopping off the low board next to younger fitter celebs somersaulting off the top board. I had to feel sorry for Helen as her make-up streaked down her cheeks and she hunched next to the perfect figure of Jenni Falconer who was making lycra look comfortable.

Whatever your view of reality TV is I don’t think it is going anywhere just yet. And although it is cheap television and often leaves you feeling unsatisfied afterwards, there is often something intriguing about it as well. And just think if we had no reality tv, there would be no Simon Cowell, Dermot O’Leary and Bruce Forsyth on prime time TV. Actually perhaps we should switch it off!